MINNEAPOLIS — Editor’s note: Some of the images depicted in the video and testimony are graphic. Have a question you’d like to hear our trial experts answer? Send it to [email protected] or text it to 763-797-7215.

The second week of testimony begins Monday morning in the trial of former Minneapolis police officer Derek Chauvin, with his former chief expected to take the stand soon.

Minneapolis Police Chief Medaria Arradondo is expected to be called as a witness by the prosecution as early as Monday. Arradondo fired Chauvin and the other three officers involved in Floyd’s arrest within 24 hours.

Before the jury came in on Monday, Judge Peter Cahill told prosecutors that testimony from other officers giving opinions on Chauvin’s use of force will soon become “cumulative.”

“You’re not going to be able to ask every officer, ‘What would you have done differently?'” Cahill said.

The first witness to take the stand Monday was Dr. Bradford Langenfeld, who attempted to resuscitate George Floyd and then pronounced him dead on May 25, 2020.

The prosecution called 19 witnesses to the stand last week, including multiple Minneapolis police supervisors. In a significant moment for the prosecution, the longest-serving officer on the force and the head of the homicide unit called Chauvin’s use of force “totally unnecessary.” Chauvin’s direct supervisor on that night said the former officer did not immediately tell him what type of force he used, or how long he used it.

Bystander video viewed across the globe, along with police body camera footage, showed Chauvin’s knee on Floyd’s neck for more than nine minutes.

RELATED: Derek Chauvin trial: Who took the stand on week 1?

Former Hennepin County Chief Public Defender Mary Moriarty told KARE 11 that this week the jury can expect to hear expert testimony involving everything from use of force to cause of death.

“Expert testimony can be dry, and sometimes depending on your expert, they can speak in language that, like anybody does in their own job, that nobody else really understands,” Moriarty said. “So it’s really going to be the state’s job to make sure they break that down so that it’s understandable to the jury.”

RELATED: Derek Chauvin trial: What to expect in week 2

Week two of testimony in the Derek Chauvin trial will get underway at 9:15 morning, possibly including testimony from MPD Chief Medaria Arradondo.

At 8:30, there will be a motion hearing for some legal issues to be discussed.https://t.co/hukpVJlPeD

The state called the doctor who pronounced George Floyd dead to the stand on Monday.

Prosecutor Jerry Blackwell questioned Dr. Bradford Wankhede Langenfeld, who said that he tried to resuscitate Floyd on May 25, 2020. He said Floyd was in cardiac arrest when he came into the Hennepin County Medical Center.

State: What was his condition? // He was in cardiac arrest. Langenfeld says he it was absolutely an emergency situation.

Floyd arrived in the emergency room at about 8:55 p.m., Langenfeld said. CPR had already been started. Blackwell asked if Floyd’s heart was beating on its own at any point, and Langenfeld replied, “not to a degree sufficient to sustain life.”

The paramedics who brought Floyd in said he had been restrained by officers. Langenfeld testified that they did not mention a potential drug overdose or heart attack.

Langenfeld told the prosecutor that he did not receive any report that officers had attempted to give Floyd CPR.

“It’s well known that any amount of time that a patient spends in cardiac arrest without immediate CPR markedly decreases the chance of a good outcome,” he said. “Approximately 10 to 15% decrease in survival for every minute that CPR is not administered.”

The judge held a “Schwartz hearing” off audio and video on Monday, to identify potential juror misconduct. It’s currently unclear what prompted the hearing. Judge Peter Cahill said he found no evidence of wrongdoing after questioning the jurors.

The judge and attorneys also discussed parameters around upcoming testimony from Sgt. Ker Yang, who will testify about the Minneapolis Police Department’s crisis intervention training.

Judge Cahill says if Yang’s testimony is a summary of training given — that is fine — but prosecution can’t play videos and have Yang talk about how officers should have acted.

Cahill said after the training sergeant and the two expert witnesses testify about whether Chauvin’s use of force was appropriate, the state will need to stop focusing on that topic.

“We are getting to the point of being cumulative,” Cahill said. “You’re not going to be able to ask every officer, ‘What would you have done differently?'”

Defense attorney Eric Nelson has made a motion to have the entirety of Derek Chauvin’s body camera video submitted as evidence in the trial.

The prosecution played the videos but only showed part of Chauvin’s, and cut off the other officers’ cameras early.

Nelson wants the entirety of the police body cameras submitted as evidence in the case. (The prosecution only played portions of Chauvin’s and cut off the videos of the other three officers early)

Nelson said that the videos have to be included in full to show the “totality of circumstances.” But prosecutor Matthew Frank said some of the footage is not relevant, including the part that relates to whether or not Floyd passed a counterfeit bill.

The testimony during the first week was often emotional, with several witnesses breaking down into tears while recalling the events they witnessed at 38th and Chicago last year as Floyd was arrested and restrained by Minneapolis police.

The court heard from George Floyd’s girlfriend Courteney Ross about their relationship and his struggles with opiate addiction; Genevieve Hansen, an off-duty Minneapolis firefighter who wanted to give Floyd medical aid at the scene; MMA fighter Donald Williams, who said he recognized Chauvin’s actions as a “blood choke;” and several minors, one of whom shot the now-viral video of Chauvin kneeling on Floyd’s neck.

Friday’s proceedings ended early after Judge Peter Cahill said the trial was running ahead of schedule. The trial is estimated to last about four weeks.

Legal expert Mary Moriarty expects to hear more testimony this week from law enforcement on use of force, including from Inspector Katie Blackwell who was the commander in charge of MPD’s training unit last year. She said we might also hear from a use of force expert put on by the state to talk about Chauvin’s actions, and possibly someone from the Bureau of Criminal Apprehension.

Dr. Andrew Baker, the Hennepin County chief medical examiner, is a key witness as Floyd’s cause of death continues to be a focus in the trial. He conducted the autopsy, stating the cause of death was “cardiopulmonary arrest complicating law enforcement subdual, restraint, and neck compression,” and that the manner of death was “homicide.”

RELATED: Week 1 of the Derek Chauvin trial: 5 important moments you may have missed


GALLERY: The Trial of Derek Chauvin 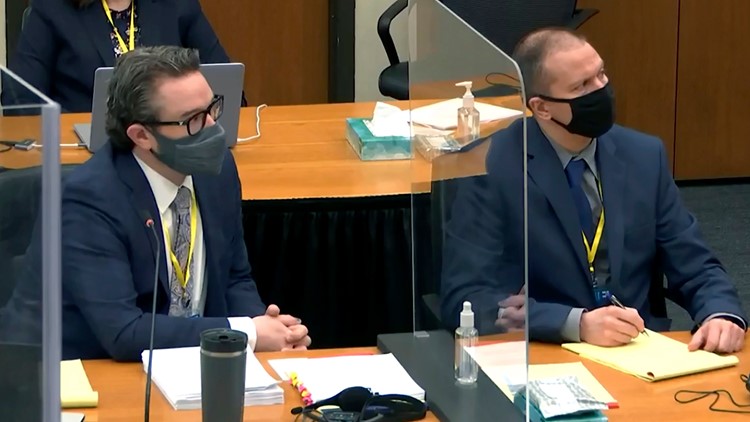 Myanmar: CNN reports from inside the country. Here's what we're seeing - CNN Video